Top Posts
Stocking Filler Ideas: Styles for all the family
The Ultimate Slipper Gift Guide: How to pick...
Shop Faux Fur-Lined Styles This Season
The Best Shoes to Wear with Leggings and...
How to Wear Chelsea Boots: A Style Guide
The Best Boots for Women this Autumn and...
The Top 10 Best Boots for Men this...
Back to School: The Best School Shoes for...
Festival Ready: Best Festival Shoes, Boots, & Wellies
How to Style Low Heels
Cookie Policy

There’s nothing quite like a cosy night in with a Christmas classic to get you in the festive spirit. Settling in for a festive film with the family is a quintessential part of the yuletide season. Everyone has their favourite Christmas cracker, from animated adventures to ghostly visitations.

Which got us wondering, what is the most popular festive flick in the country? Does each corner of the UK have a different merry movie close to its heart?

To crown a winner of the UK’s best-loved Christmas film, we unpacked city by city data on the most popular search terms for festive films across the nation.

So put on your slippers, grab a mince pie (or two) and let’s find out Britain’s festive favourites below.

And the award for Britain’s favourite festive film goes to…

The wonderfully charming rom com brings the best in British acting talent together for a star-studded winter warmer that is full of festive cheer.

A modern classic with plenty of feel-good factor, Love Actually topped our charts with a staggering 1.56 million searches.

Richard Curtis’ Christmas comedy was most popular in Aberdeen, perhaps proving it’s the perfect antidote to those cold Scottish evenings.

Wrapping up second place was Home Alone. The comedy classic pits child-star Macauley Culkin against a pair of thieves intent on breaking into his family home a few days before Christmas. The booby-trap laden jaunt had a whopping 1.4 million searches.

How the Grinch Stole Christmas rounds out the top three, with Jim Carrey’s big, green take on Dr. Seuss’ classic proving most popular in Sunderland with around a million searches. 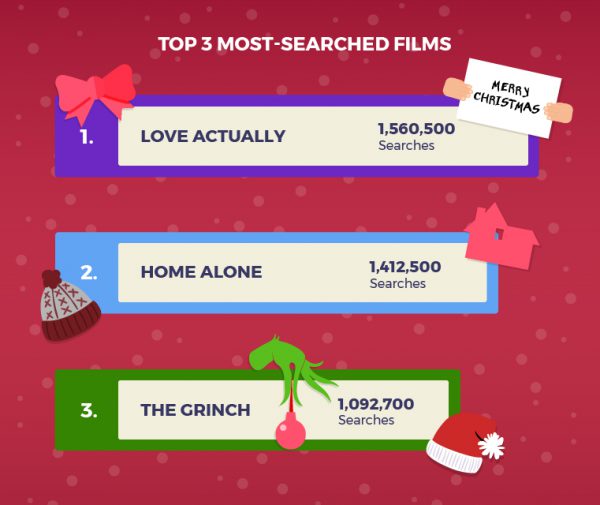 The south coast has a soft spot for yuletide classics

Nowhere in the UK has searched for more Christmas films than the south coast city of Bournemouth.

Famous for its summer escapes and sandy beaches, the seaside town of Bournemouth seemingly loves a festive flick.

Of our 10 most popular films, Bournemouth had the highest density of searches of any location in the nation for five of them.

Stop-motion classic The Nightmare Before Christmas tops the tree at just over a million searches, while Bournemouth locals also topped the stats in searches for The Snowman, The Holiday, Nativity and Netflix’s Oscar-nominated Klaus.

Charles Dickens’ son Henry studied at Cambridge University, so it shouldn’t surprise that his father’s tale of Christmas ghouls is most popular in the ancient city. Scrooge’s ghostly tale of redemption had 440,600 searches overall.

It’s a Wonderful Life rounds out our quintessential Christmas viewing with a place in the top ten at 422,200 searches. 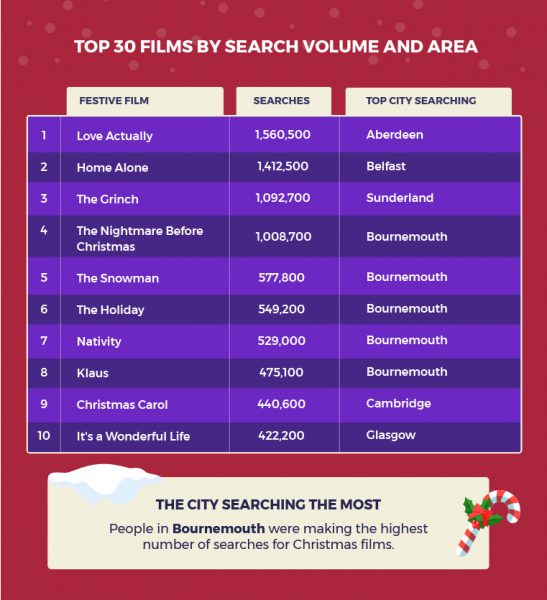 Fans of the festive season get started in the summertime

For most of us, thoughts turn to Christmas shopping, visits from Santa and mince pies mountains around November. So, it’s not surprising that November and December are the busiest months for searching festive films.

Some folks start early though, with The Holiday proving a secret summer smash with August the second busiest month for searches of the film.

Indeed, the warmer weather seems to be a popular time for festive film searches. American comedy Love the Coopers saw an increase of 237.5% for April searches as people’s minds drift back to the yuletide just gone. 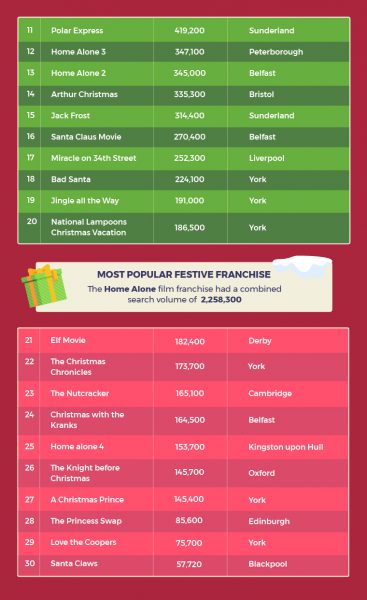 Getting cosy this Christmas

Our ultimate guide to a festive family night in

There’s nothing quite like sticking on a festive film to get you in the mood. Pick out your favourites from the list above and get the whole family in the living room ready for your yuletide extravaganza.

Pour yourself a winter warmer

Whether your festive tipple is a hot chocolate, sweet mulled wine or something a little stronger, pour yourself a hot drink and warm those wintry cockles with something full of festive flavours.

Fill up on festive treats

Don’t be shy, have that extra mince pie! There’s always New Year for the new you and Christmas is all about enjoying yourself. Make sure you’ve got plenty of snacks in, from mince pies and stollen to mixed nuts and crisps.

Snuggle up in your slippers

Sitting snuggly indoors while the winter wind howls outside is all part of the fun. Grab your favourite pair of slippers, soft cushions, blankets and throws and make sure everyone is wrapped up warm.

Merry Christmas to all, and to all a good night!

After unwrapping all those stats it’s safe to say our Christmas elves are ready to slip into their slippers and stockings and hit play on a backlog of festive films.

Wishing you all a very merry Christmas! 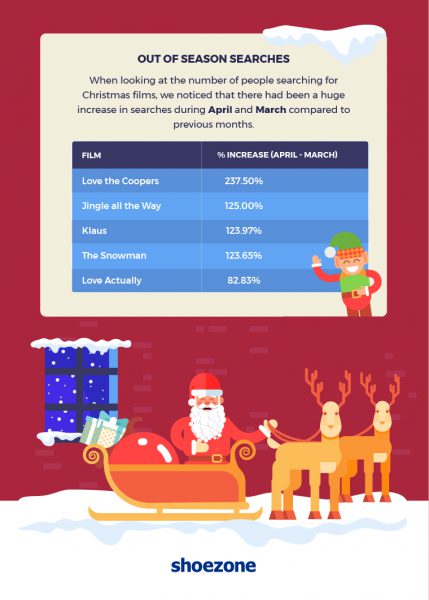 Pudsey’s back again this year at Shoe Zone

How To: Style Your Laces!

Wearing Over the Knee Boots: A Quick Guide

How to Wear Men’s Canvas Shoes