Chelsea Boots for Men and Women: A Style Guide

Chelsea boots have long been a classic choice when something easy, comfortable yet smart is required and there’s no chance of that changing anytime soon.

We think it’s fair to say that Chelsea boots are everyone’s favourite ankle boots. Originally created in Victorian era England as a fashion boot for men though women soon adopted the trend. They differed from other boots at the time as they were elasticated rather than lace up. It wasn’t until the 1950’s and 60’s they were graced with their iconic name. They became a firm favourite amongst the young, artistic fashionistas of London who were collectively known as the “Chelsea Set”, the group included such icons as Mary Quant and The Beatles. It’s from here that Chelsea Boots for men and women as we know them remain a firm favourite today.

Heeled Chelsea boots were also a big deal in the 1960’s, originally created at the request of The Beatles. Baba boots as they were often referred to, are Chelsea boots with a cuban heel and a slightly more pointed toe. They were quickly popularised by the Mod movement and were often worn with tailored suits.

Here we’re going to take a look at how Chelsea boots can be styled as well as what trends you can expect over the coming months.

How to Style Chelsea Boots

Very similar in style to Jodhpur riding boots, Chelsea boots are fantastic if an equestrian look is what you want to go for. Team them with a pair of skinny jeans or cords with a smart blouse and tailored jacket and you’re onto a winner. Opt for earthy tones of chocolate and tan for an understated yet timeless look. Brown suede boots work extremely well with this look, adding to the rustic, country vibe. If you really want to dress things up, swap the jeans or cords for tailored ankle grazer trousers, this will instantly take you from daytime to night time, the perfect look for the office too.

If you’d prefer to dress things down a little, Chelsea boots are good for that too! Because they’re so versatile, they can just as easily be paired with leggings and an oversized chunky knitted jumper. A casual, comfortable look that’s perfect for strolling around the shops or walking the dog. 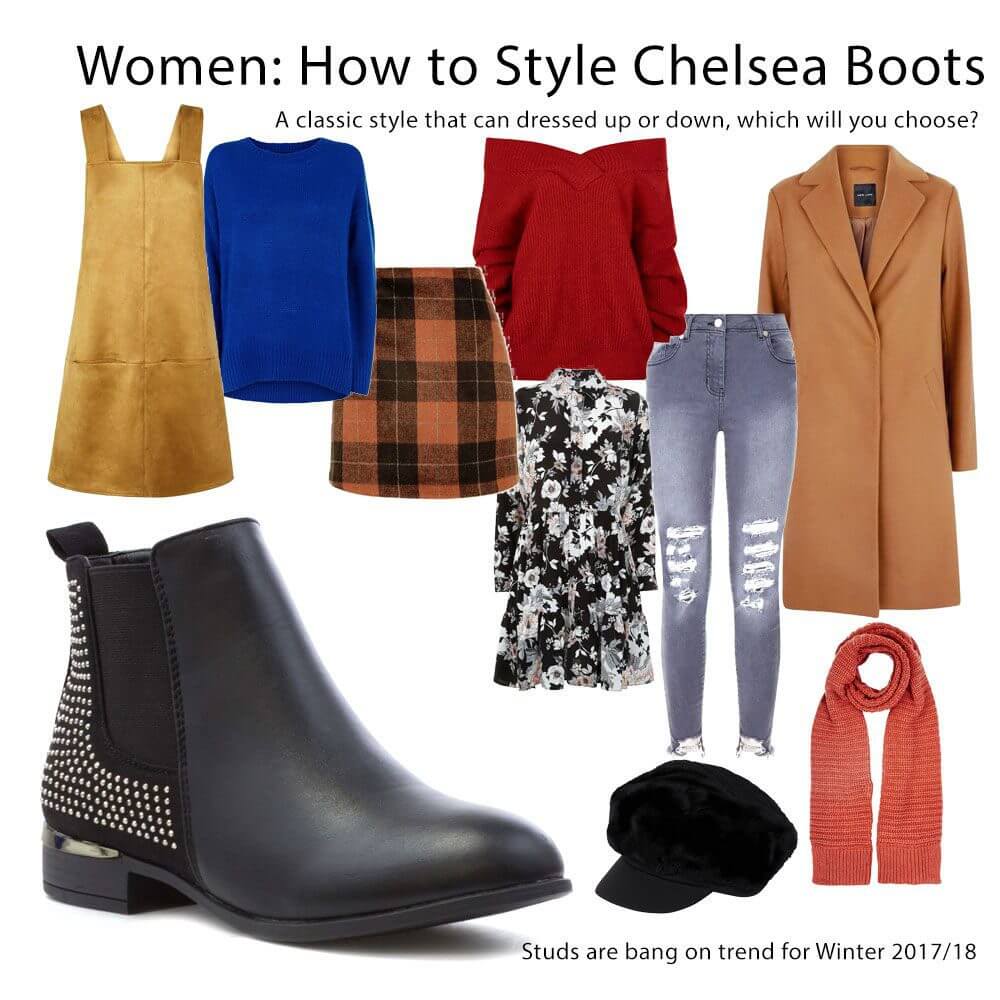 Womens Chelsea boots don’t just go with trousers and jeans either, they can also look the part with dresses and skirts too. Both can be teamed perfectly with a good pair of thick tights (add a coloured pair of tights if you really want to stand out from the crowd!) and a laidback mac and funky scarf. If you’re feeling particularly daring, forgo the tights and get those pins out for the world to see. You might want to do this on a somewhat milder day though.

Another big fashion statement that’s making a comeback this year is culottes. If you want to mix Parisian vibes with London chic, culottes and simple black boots are the perfect way to do it. Add a cape or oversized jacket for real runway style.

This year will see the return of some old time favourites, such as the classic tan boot as well as some newbies such as those with delicate embroidery which harks back to the 1990’s. If you prefer a more grungy look, the new wave of studs and zip up Chelsea boots is sure to bring out your inner rock chick.

When it comes to womens heeled chelsea boots, it’s all about keeping things sleek with neutral colours such as black and navy with clean, feminine lines. Boots with pointed toes are great if you want to dress an outfit up, opt for patent leather for added va va voom.

As we’ve already mentioned, mens Chelsea boots were a thing before women took on the trend and still remain a popular choice to this day. The types of Chelsea boots that are popular with men today vary slightly to those back in the 50’s and 60’s. Nowadays it’s more about flat, robust footwear with a solid yet flexible sole that protect against the elements. Though celebrities such as Harry Styles and David Beckham are definitely bringing the Baba boot back! 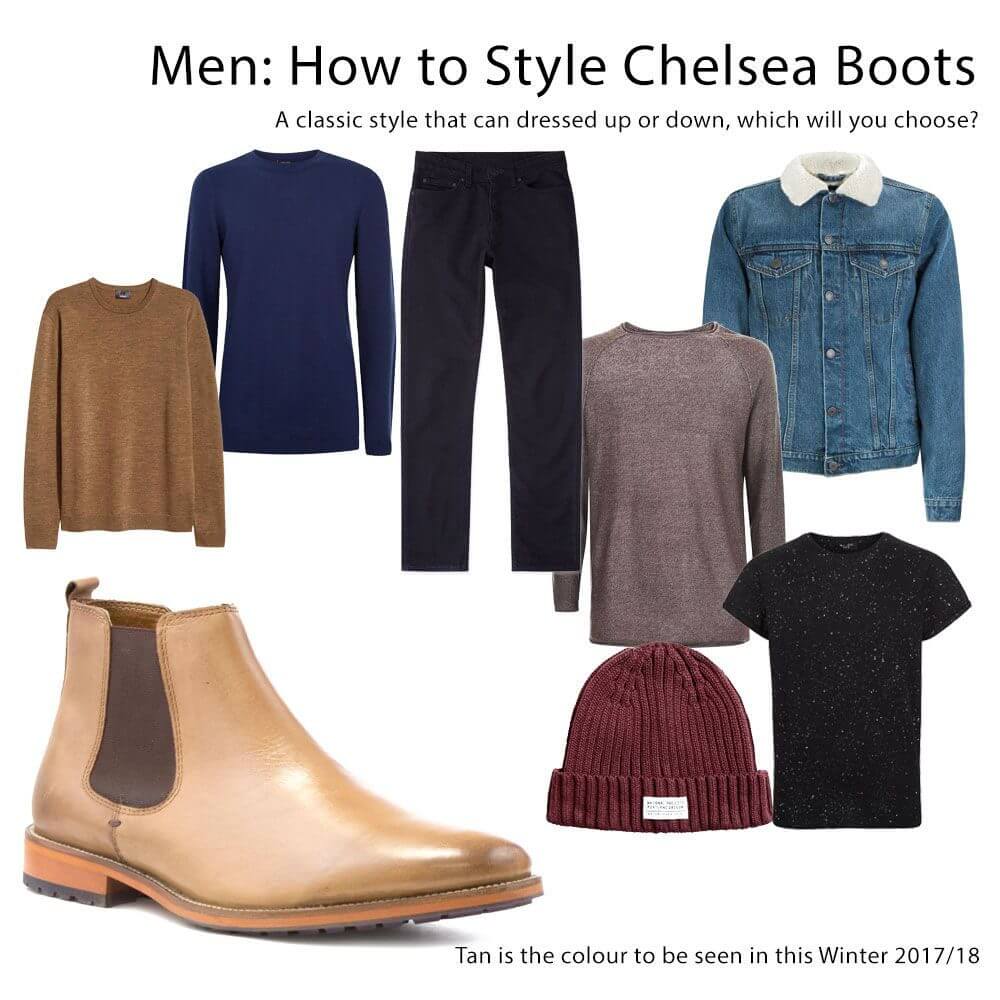 Rather than a select few, they’re also popular with many different subcultures these days and are a wardrobe staple for rockers, hipsters and businessmen alike.

If something a little more preppy is your thing, a solid pair of leather Chelsea boots can be just as easily dressed up (we suggest keeping things simple with classic black or tan colours  for versatility). A clean cut pair of fitted jeans, a patterned shirt and a fine knit round neck jumper will have you smartened up in no time. Add a camel coat and lightweight scarf to complete the look if you’re out and about.

The Mods were pioneers when it came to making style statements and paved the way for Chelsea boots as we know them today. So what better way to honour them than with a sleek pair of pointed toe boots, turned up jeans and a slim fit polo T-shirt… with a buttoned up collar of course! Or if you really want to look the part, a slim fit tailored suit with turtleneck shirt is about as authentic as you can get. All you’ll need then is a Vespa, some catchy Brit Invasion tunes and the streets of swinging London will be right at your feet (or at least feel like it anyway!).

We’re confident that Chelsea boots will always be a part of the fashion world, not only are they extremely comfortable but they’re timeless too. Completing any outfit in any style, they’re loved equally by men and women the world over… and rightly so!

What are the Best Shoes for Men and Women over 40?

What Are the Best Shoes for Over 50s?

How to remove stains from shoes

How to Choose the Right Shoes for a...

Shoes for a Job Interview: How to Choose...

How To Store Your Shoes: Creative Budget Ideas

Best Heels for All Occasions

How to Wear Ladies’ Canvas Shoes