Top Posts
What To Wear Brown Boots
Slipper Cleaning Manual: How to Wear and Wash...
The Best Heels for All Occasions: From Holidays...
Stocking Filler Ideas: Styles for all the family
The Ultimate Slipper Gift Guide: How to pick...
Shop Faux Fur-Lined Styles This Season
The Best Shoes to Wear with Leggings and...
How to Wear Chelsea Boots: A Style Guide
The Best Boots for Women this Autumn and...
The Top 10 Best Boots for Men this...
Cookie Policy

Our weekend trip to CarFest for BBC Children in Need 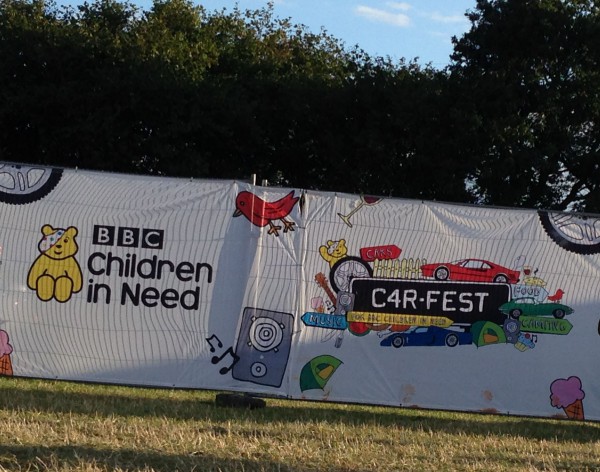 For the second time my family and I (hubby and daughter) have been lucky enough to attend CarFest South. Having been last year we knew what to expect and had booked ourselves into a local B&B well in advance and were looking forward to it immensely. The ‘Pudsey Park’ as my 3 year old had nicknamed it lived up to all our expectations and more.

The festival is generously hosted in the grounds of Laverstoke Park Farm, a working biodynamic and organic farm in Hampshire, owned and run by former F1 World Champion Racing Driver, Jody Schekter. Not only does Jody have a couple of F1 cars lying around in his back garden to show off but a whole host of other people bring their cars to join in the fun. From F1 cars to rally cars, The world’s fastest bed and a fully roadworthy bathroom many, many cars made the ‘hill climb’ driven by celebrities, proud owners and auctioned rides. Paul Hollywood and Mary Berry of The Great British Bake Off were also making some dreams come true as they took several children along for a ride of their lives in Chitty Chitty Bang Bang. 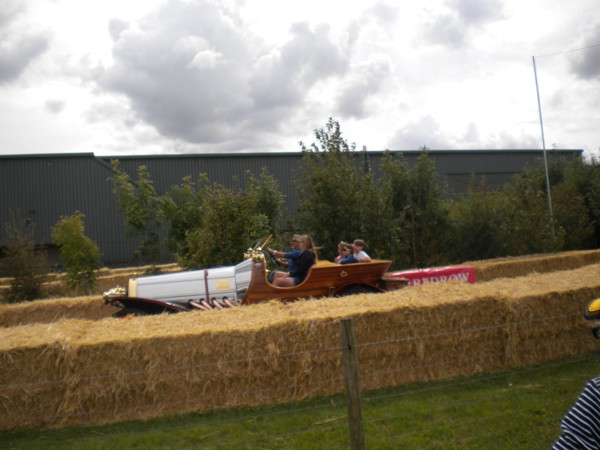 However, I am not in any way a petrol head (although I am partial to watch the odd F1 race) and it was not the cars that turned my head this weekend (apart from the pink Caterham that my daughter climbed into!). 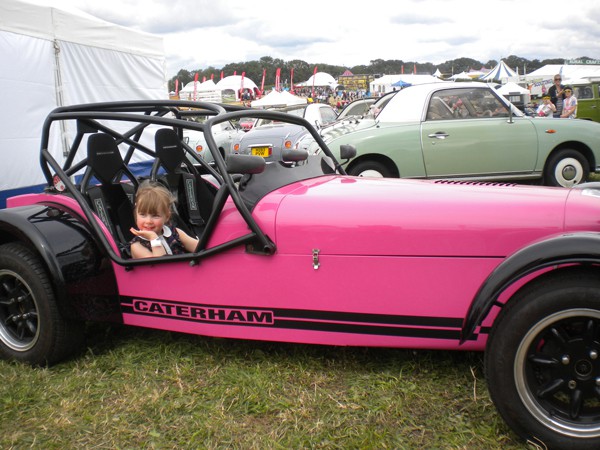 The event is billed by Chris Evans himself as “the perfect family festival” and it sure is, everywhere you look there are activities for families and children. From Bouncy Castle Kingdom to the Big Top there was non-stop fun, fun, fun.  The book den was a welcome retreat from all the excitement and the Arts and Crafts tent provided fun activities to keep us amused. The Big Top hosted many shows including a Rock Choir and BugFest but our favourite this year was Sam Sam The Bubble Man who holds 9 world records.  His amazing, huge bubbles were big enough for a person to stand inside!

The ‘Showground’ held  The Lamb National, with six Herdwick sheep showing off their best jumping skills (although we backed the pink one which didn’t win!), Sharky & George Kids hour, The Red Barrows, Kangaroo Kid and our highlight – The Tigers Parachute Display Team – landing in the centre of the Showground on both days!

Over on the music field, there are various ‘foodie’ activities with Saturday’s focus being Britain’s Best Cakes vs Pies (judged on Sunday afternoon and again, Cakes won this year!). Sunday brought all sorts of goodies with wine tasting, mozzarella experts and sourdough bread demonstrations. Whilst we didn’t partake in these we did enjoy the good food on offer ranging from paella and risotto to Japanese noodles, Thai curry and freshly made wood fired pizza (for which there was a constant huge queue), not forgetting great British fish and chips and of course Laverstoke Park Farm’s very own burgers, sausages, meatballs and buffalo ice cream.

On Saturday the music began with Bootleg Beatles and Bellowhead soon got us to our feet. 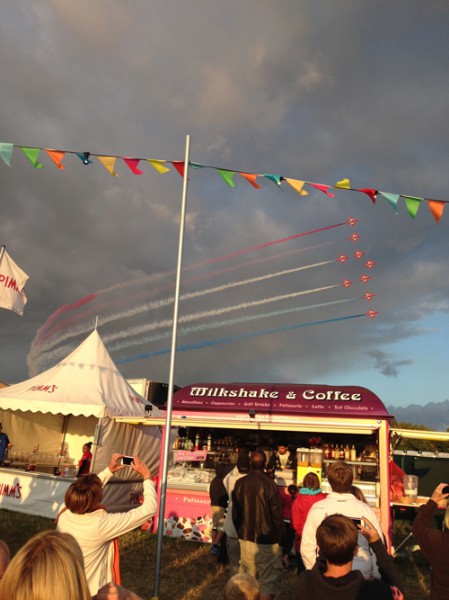 Seasick Steve then picked up the tempo again performing a foot-tapping set which culminated in Chris Evans inaugurating him as a Lifelong President of CarFest! Having performed in 2013 and then at both CarFest North and South in 2014 he is a firm favourite.Then as the sun was setting we were in for such a treat, the Red Arrows appeared overhead but not just for a fly-past, oh no, they performed for 20 minutes accompanied by commentary on stage that was in touch with the pilot’s radios.  We knew where they were coming from, what the formation was called and that they were flying at 800 miles an hour – awesome!!

Reluctantly, to the opening sounds of Toploader, we had to cut our Saturday short as it had all got too much for our daughter (who had been up since 5.15am!). I was sad to miss Kaiser Chiefs, that would have been one of my highlights but it just couldn’t be done this time. 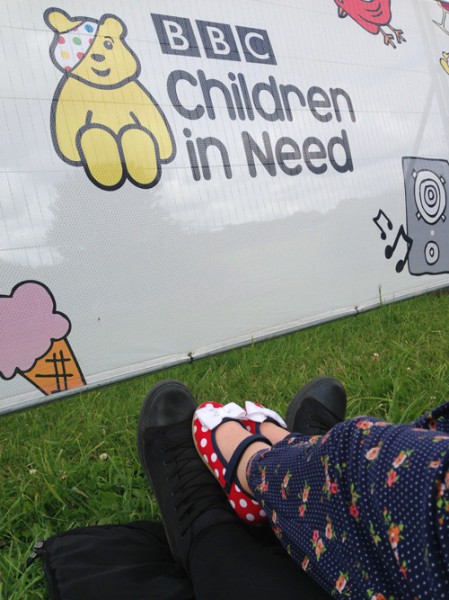 Sunday dawned and contrary to the weather forecast we had sunshine, so much so that I had to ditch my trusty Shoe Zone high-top canvas (which had been so comfy and practical this far) and go for flip flops!  She loved her red and white polka dot shoes –not really festival wear but they do prove that we really did have good, dry weather and they were very easy to spot in the numerous piles of kid’s shoes that we had to retrieve them from outside bouncy castles, trampolines and playbuses!

Yet more amazing stunts in the air from RAF Chinook, Lancaster Bombers, a Hurricane & Spitfire to name a few and we continued to enjoy the never-ending activities on offer – the playbus was a favourite and it was all we could do to stop our child from enrolling at kids driving school – the motorbikes took her fancy but fortunately (for us) she was too young this time! The bouncy castles had to be re-visited and a ride on the helter skelter was a must…..and we finally managed to track down Pudsey himself spotting him boogying on the showground and later as he appeared on stage with Blush between acts. my trusty Shoe Zone high-top canvas (which had been so comfy and practical this far) and go for flip flops!  She loved her red and white polka dot shoes –not really festival wear but they do prove that we really did have good, dry weather and they were very easy to spot in the numerous piles of kid’s shoes that we had to retrieve them from outside bouncy castles, trampolines and playbuses!

As the sun shone on Sunday afternoon the music opened with Texas and Nell Bryden. We had fun listening to 10cc and Paul Heaton and Jacqui Abbott (ex-Beautiful South) were awesome. Taking a 3 year old down to the front of the stage and dancing to The Feeling was one experience I hadn’t anticipated but she loved it (as did I!) and the trip had to be repeated with daddy and again to see both Sophie Ellis-Bextor and Dario-G……I think there may be plenty more gigs for this girl in the future!

As the night began to draw to a close a plane with fireworks from its wings flew over and, with a hot chocolate in hand, we heard that CarFest had raised £1.5million this year with over £50,000 more raised from auctions at CarFest North and South. It brought to mind what it was really all about. We’d had a fantastic time and by doing so had helped to raise a heap of cash to enable BBC Children in Need to do even more of its fantastic work with disadvantaged children up and down the country.

As Jamie Cullum took to the stage (playing a drum, not a piano) we knew the party really was going to have to come to an end. The music played on (with Jamie Cullum now on piano and in full swing) and as we walked back to the car I reflected on this amazing show, the organisation and hard work that must go into it, the generosity of Jody Schekter and his family and the enthusiasm and energy of Chris Evans and the BBC Children in Need team to make it all happen.

If you ever get the opportunity to go, grab it with both hands, it’s super fun and it’s for a good cause!

Thanks CarFest for a fantastic time!

Sandals that won’t disappoint – By Tracy

Pudsey’s back again this year at Shoe Zone

Summer Footcare: How To Wear Sandals In Style

Where is the UK’s ‘Comfy Capital’?

What Shoes Should I Wear to a Spring...

Which Winter Boots? Best Footwear for Ice and...

The best shoes for home workouts