As part of the London Olympic 2012 legacy there is a cycling event across London on one weekend each August.   The Sunday involves a 100 mile charity ride largely following the route of the 2012 Olympic cycle road race. However as a newish cyclist the Saturday Freecyle appealed to me far more. This is an event open to everyone where a number of roads are closed to traffic and us bike people are let loose. 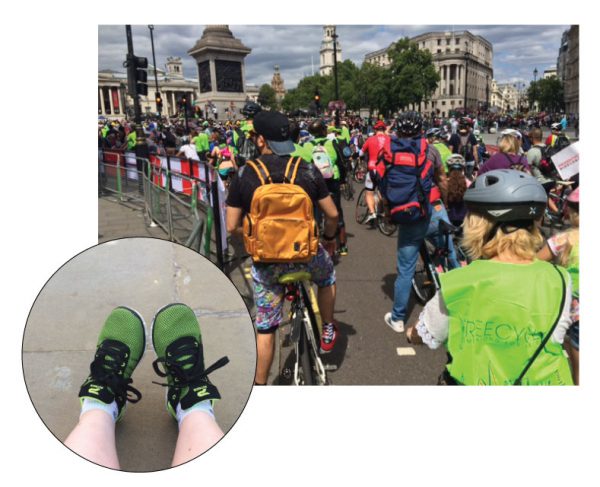 My husband, Nick, and I decided that we fancied trying out our bikes on the streets of London. I decided to go all out and also wear my new cycling clothes (with a saddle this small padding leggings are a must!). As my old trainers are quite bulky and cyclists are all about saving weight, I decided to try out a pair of Shoe Zone’s running trainers. As soon as I tried them on I knew they would be perfect. They were nice and light and really comfortable.

Our day in London began with us parking in Stratford and getting the DLR into the centre. This was not an experience I ever want to go through again – I was in everyone’s way! When we found one of the closed roads it was fairly busy but once we got going it was a nice relaxed atmosphere with a riding pace to match. There were all sorts of different bikes from super sporty road bikes to fold up bikes. I even saw a recumbent, the sort you almost lay down on! The people were just as varied, really tiny children up to all ages. 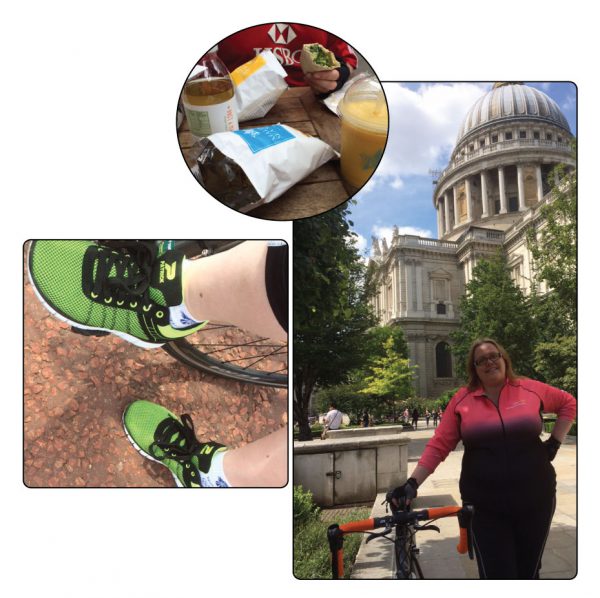 We rode to St Pauls Cathedral, down to the Strand and across Waterloo Bridge. We had to U-turn at the end of the bridge and I’d like to say I felt like a pro-rider going round an Alpine hairpin bend but in reality I was trying not to fall off. We carried along to Whitehall where a lot of people were peering into Downing Street. Maybe they were waiting for Boris to join us on one of his bikes. We turned into Birdcage Walk and after a brief photo stop at Buckingham Palace we rode up The Mall. This was the bit I was really excited about. So many of my cycling heroes have raced along here – I did get goosebumps.

Negotiating Trafalgar Square was pretty horrendous. There were numerous crossing points for pedestrians and we couldn’t get going. We found somewhere for a brief lunch break and got back in the saddle. The route back was mostly the same as the route out. As we were finishing the roads began to open and I decided it was safer to walk. Luckily my new trainers were still comfy, no rubbing and served me well on my walk back and the half hour standing tube ride. We got back to the car and settled in for our drive back to Leicester.

We had a really fun day, whilst the crowds were a little bit much for me it was brilliant to see how enthusiastic everyone is about getting on their bikes for a day. I was also really happy how I got on with my bike. I’ve not been very confident on it but I actually began to enjoy the funny little thing.

Blog Spot of the Week: In the Zone- By Oh My Style!

How to Clean White Shoes: The Ultimate Guide

Back to School Checklist 2018

Shoes to wear with jumpsuits: Dos and Don’ts

Best Heels for All Occasions

The Shoes Behind Your Favourite Albums

Bridesmaid shoes: the best heels and flats for...

How To: Style Your Laces!