In May, our wonderful teams here at Head Office managed to pull together a day of challenges, games and quizzes in aid of Comic Relief. An amazing cause that we celebrate and come together annually to raise money for, and after a somewhat unusual couple of years behind us (as I am sure you’ll agree), this coming together absolutely made up for it!

Where working in-office can be fun and most certainly has its perks, you’ll often pass colleagues in the corridors that you’re not so well acquainted with or perhaps don’t even know the names of. This celebration was most certainly one that brought teams and individuals closer together – from fun games such as Giant Jenga to sports day-like events where directors competed against colleagues in the hopes of raising some cash. Whether you were participating, cheering from the crowd or capturing shots of the moment, the energy was electric and so many amazing people came together to make it happen. 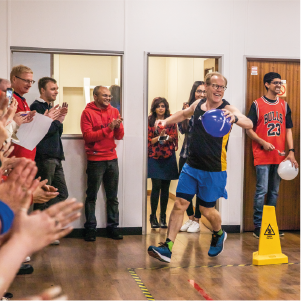 The day was kicked off by the main event – the relay. Set up by a couple of members of our fabulous marketing team, this was a seriously strong start and got the buzz and crowd going! With two teams of 3 (colleagues vs. company directors), they were to race with a balloon to the small stall of seats, pop the balloon by placing it on their seat and sitting on it, after that they raced to the makeshift sports area where they would score a goal (yes this was made a little more challenging for the directors in order to amp up the fun), and then race over to the finishing line. All of those who decided to come along to support and cheer on the team’s worked wonders, everybody was totally invested, and it was a roaring success for the first event of the day. After a small intermission, everyone headed over for a series of fun games – first was a game of Higher or Lower which was highly entertaining (and again may have been tampered with at the expense of the directors’ pride). After that we watched a very intense game of Giant Jenga play out which was equally as enjoyable but very tense. Then we had the cycle relay which was tiring to watch but the edge was soon taken off with the finale, the music through the decades quiz. To accommodate all ages and tastes, the music quiz was great fun yet proved ever so difficult to bite your tongue when your favourite song finally played! Although again this challenge was set between two teams, it was an inclusive event, and everyone had great fun. 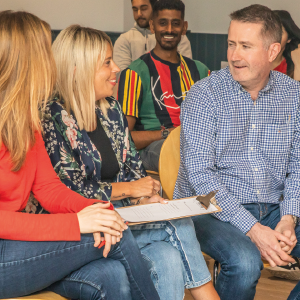 We had events running throughout the day as well such as darts, pool, and ping pong tournaments where each game was paid for using Di Dollars – as per inspired by our one and only, lovely receptionist Di. These could also be used to fund raffle tickets which were an absolute sell-out and understandably so. With so many prizes up for grabs even if you weren’t a winner of the top hamper, everybody was beyond excited to hear results over the tannoy once back at their desks. With prizes ranging from chocolate and cocktail making kits to slightly more expensive chocolates and champagne, even if you weren’t a winner, knowing that you had contributed to something far bigger, and deserving was refreshing. The amazing cake sale also ran throughout the day for which the team worked very hard to provide a delicious-spread – so we all felt like we had won for the end of the day. 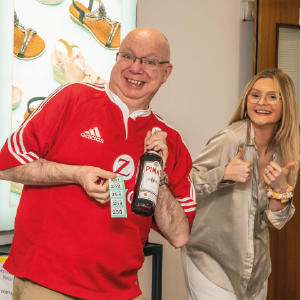 Our stores even got in on the fun with raffles, fancy dress and small games on the day with many sending in photos of their well-crafted store displays and candid colleague shots capturing behind the scenes fun. So this really was a company-wide effort and one that we are proud of and that we hope to evolve over the coming years.

Here at Shoe Zone, we pride ourselves on not only being able to manufacture and distribute affordable footwear, but also give back and to those who need it most. Comic Relief is a major charity who strives to create a just world, free from poverty whose mission is to drive positive change through the power of entertainment. We are delighted that with our efforts company-wide we were able to finally donate £27,894.21 from store donations, generous employee contributions and a jolly good day here at head office. We wanted to thank everyone who helped to make Comic Relief the amazing celebration that it so deserves and those who donated, big or small, your donation makes a difference.

How to Style Chunky Sandals

How to Choose the Perfect Wedding Shoes

What are the best shoes for the races?

What Do Your Shoes Say About You? Take...

How to Winter Proof Shoes and Boots