Where is the UK’s ‘Comfy Capital’?

Across the bedrooms, living rooms and bathrooms of the United Kingdom, people are sinking their feet into soft slippers, donning their fluffiest dressing gowns and putting their feet up like never before.

Brits are getting cosier than ever right now, with Shoe Zone recording a whopping 467% increase in slipper sales in March 2020 compared to March 2019.

But just where is people’s lust for loungewear, craving for cushions and hunger for hot water bottles the strongest?
To name the Comfy Capital of the UK, we bedded down and browsed city by city data on the most popular search terms for cosy queries around the UK, from fluffy socks to cuddly pyjamas.
Each city was awarded points out of 50 based on the number of searches for each item, with these then added up to create an overall ‘comfy score’.

Read on to find out who holds the UK’s (presumably fur-lined) crown. 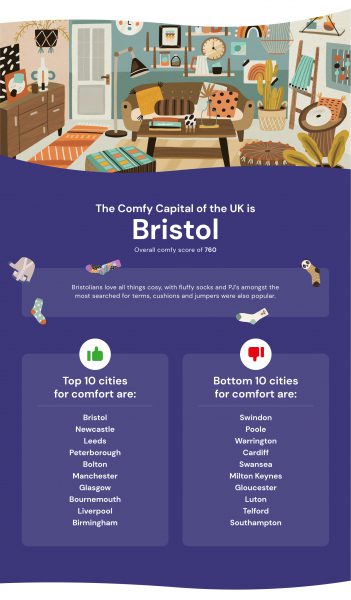 And the winner is…

The Comfy Capital of the UK is none other than…Bristol!
Renowned for its suitably chilled-out Trip Hop scene, the city scored highly across the board. According to the stats, Bristolians love all things cosy, with fluffy socks and PJs the most searched for terms, but cushions and jumpers also popular.
In fact, with an astonishing overall score of 760, it was leagues ahead in the relaxation stakes – not bad for a place dubbed ‘The Workshop of the World’. 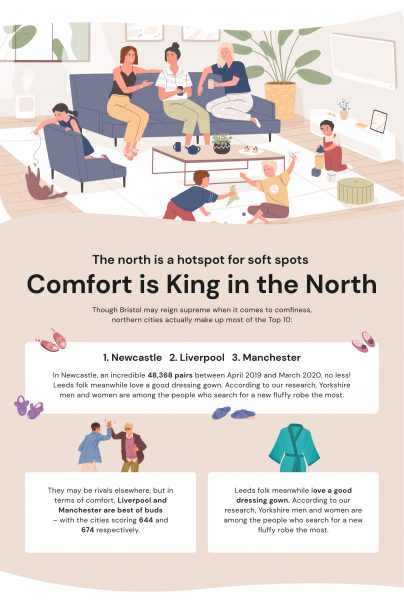 The north is a hotspot for soft spots

Comfort is King in the North

Though Bristol may reign supreme when it comes to comfiness, northern cities actually make up most of the Top 10.

Newcastle is the star of the show as far as slipper sales go, with Geordies purchasing more snug footwear from Shoe Zone than anywhere else in the country by head of population. An incredible 48,368 pairs between April 2019 and March 2020, no less!

They may be rivals elsewhere, but in terms of comfort, Liverpool and Manchester are best of buds – with the cities scoring 644 and 674 respectively.

Leeds folk meanwhile love a good dressing gown. According to our research, Yorkshire men and women are among the people who search for a new fluffy robe the most. 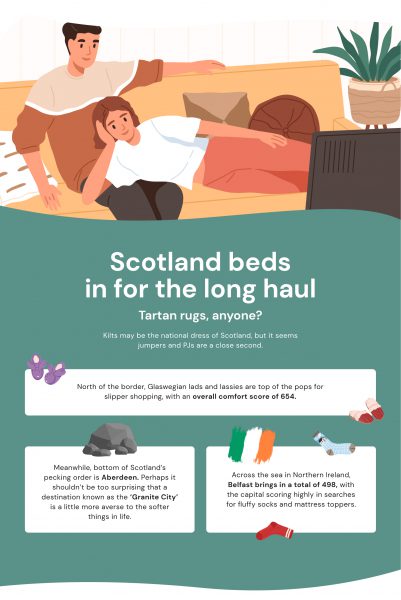 Scotland beds in for the long haul

Kilts may be the national dress of Scotland, but it seems jumpers and PJs are a close second.

North of the border, Glaswegian lads and lassies are top of the pops for slipper shopping, with an overall comfort score of 654.

Meanwhile, bottom of Scotland’s pecking order is Aberdeen. Perhaps it shouldn’t be too surprising that a destination known as the ‘Granite City’ is a little more averse to the softer things in life.

Across the sea in Northern Ireland, Belfast brings in a total of 498, with the capital scoring highly in searches for fluffy socks and mattress toppers. 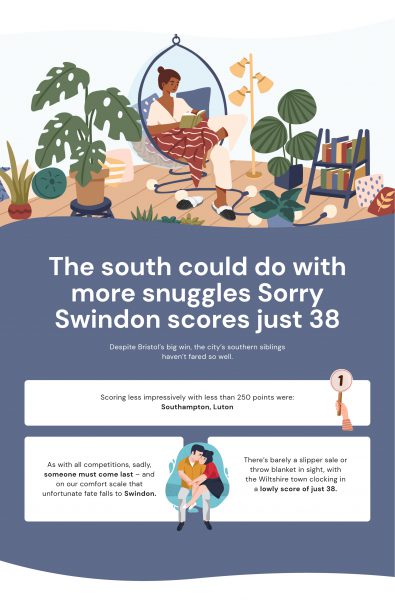 The south could do with more snuggles

It was a poor showing for Southampton and Luton at less than 250, while the Welsh duo of Cardiff and Swansea haven’t scored much higher.

As with all competitions, sadly, someone must come last – and on our comfort scale that unfortunate fate falls to Swindon.

There’s barely a slipper sale or throw blanket in sight, with the Wiltshire town clocking in a lowly score of just 38. Perhaps the place could simply do with a great big cuddle?

Peterborough adores pillows, while Liverpool’s all about loungewear

Peterborough is positively packed with pillows according to our research. Blankets and cushions are popular in Posh too – so residents probably have all the materials they need to make the world’s largest pillow fort.

Liverpudlians meanwhile can’t get enough of their loungewear. Searches for hoodies also performed well in Merseyside, with folk in The Beatles’ hometown definitely preferring a soft evening’s breather over a hard day’s night.

After going over the graphs and digging through the data, it’s safe to say our statisticians are all tuckered out.

Time to slip into our feet-soothing slippers, don our inviting gowns and relax on the sofa, Bristol-style…

Top 10 cities for comfort are:

Bottom 10 cities for comfort are:

Best Shoes for Back to School Week

Summer of Sport: The UK’s Most Popular Clubs...

What do brown boots go with? Your complete...

The 7 Types of Shoes Every Man Should...

Choosing the right summer sandals for your feet